just so you can see the mind of my 6 year old at work
every year she's asked for a present. and never been disappointed! 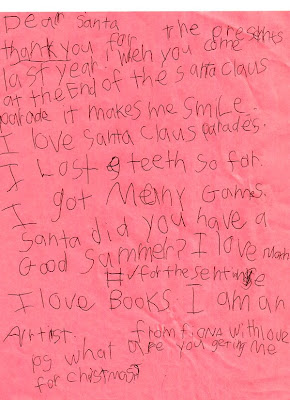 Re the little ditty from the posting below. (did you guys remember that one?)
I just googled it then looked it up in a dictionary.
A 'sheeny' IS in fact a junk man, as dad told us.
The more common meaning, which I'm sure dad didn't know, is a derogatory term for Jew.
Ah well.  that's not likely a rhyme we'll be passing on to the next generation anyway.
Posted by Lorne at 11/15/2008 02:34:00 PM 1 comment: 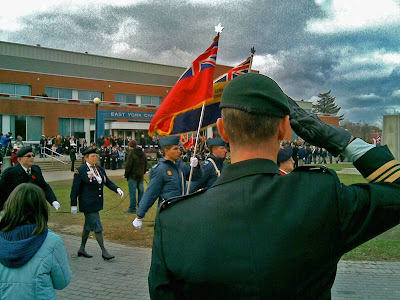 I too was surprised at the turnout even at the East York cenotaph (I didn't even notice there was one till last week).  I thought it was just me but it seems this year's remembrance day WAS a bigger deal than usual.  Wars, economy, elections and a 90th anniversary of the end of WWI brings out the crowds.  There was a formation of Harbords that flew past at 11am.  Reminded me of one of Dad's last flights, as a passenger in a Harvard.  All the WWII stuff reminds me of Dad, particularly now as I see Simon at the age Dad was when he was growing up with that war.  He learned about the planes, and soldiers and little kids rhymes about it.
"WHISTLE WHILE YOU WORK
HITLER IS A JERK
MOUSSOLINI IS A SHEENY
WHISTLE WHILE YOU WORK"
With today's wars we hide them from the kids as best we can.  How does one explain the difference to a child between what Canadians fought for in WWI and II and what the soldiers he sees fighting today are killing and dying for.
Simon really liked wearing his poppy (Yes I took the pin out and velcroed it...).
We dragged him around Flanders, Passchendaele, Vimy... he asked about things and I think he understood the answers.  He certainly will have a different perspective on it having been there than we did growing up.  Remembrance day was a day we had to go to assembly and see some old guys and listen to Andrea Prazmoski recite a poem about a cemetery in some field owned by a guy name Flanders (Ned?).  Honestly, it wasn't till I went there I realized Flanders is the whole region where those really nasty WWI battles were.  Those fields with the crosses row on row are everywhere in Flanders.  I get it now.  I watched a lot of History Television this week. 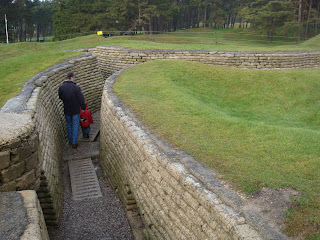 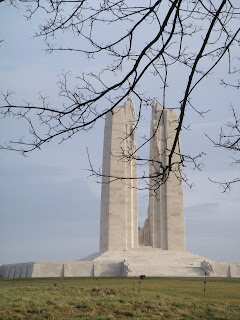 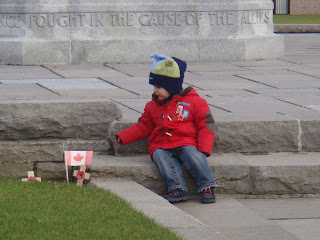 Memorial at Passchendaele: "To honour the Canadians who on the fields of Flanders ... fought in the cause of the allies" 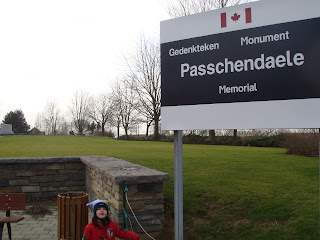 It's just a quiet little town that so many men went though hell and died trying to get to.
We cruised through in a Renault. 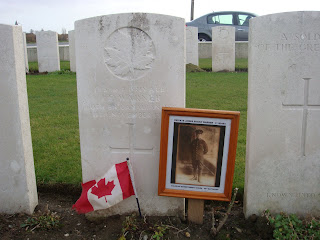 So many of the headstones like the one on the right say only "A Soldier of the Great War".

It's regretful that Dad never managed to visit places like this or Normandy and Juno beach (we knew he was never gonna get to Mount Suribachi on Iwo Jima, as much as he'd refer to it).  I think he really would have appreciated being there.  I would have liked to take the tour with him.
It seemed like he was finally gonna start to venture "across the pond" but fate had something different in mind.
So this Remembrance day we remember.  And we can be thankful.
Posted by Lorne at 11/13/2008 11:12:00 PM 1 comment:

So, there's much to remember this year. Globally, there are wars going on where Canadian soldiers are being killed with terrible frequency. Afghanistan has brought standing at the cenotaph into a stark new perspective; instead of remembering those who fought and died in WWI and WWII, generations ago, now there are contemporaries dying.
I was quite surprised, in a good way, at the size of the crowd at the cenotaph in Memorial Park in downtown Calgary. There were many hundreds there. Probably about 200 in uniform, and many times that were citizens come to be respectful. This year, for the first time, all 4 of us went to be there. And I'm glad we did.
Later this evening, we took advantage of the day of remembrance to light a candle for our own relatives who've died. In the last year, Dad in march, and Susan's Grandmother, Doreen, just last December.  This is the second year in a row we put up pictures, lit a candle for each, and recalled the people who we've lost. Of course, I never expected to add two more over the year, but then who knows what tomorrow brings, eh?
They live on in our memories. May that always be true.
Posted by ooblio at 11/12/2008 12:10:00 AM No comments:

Does it count if they WANT to work? 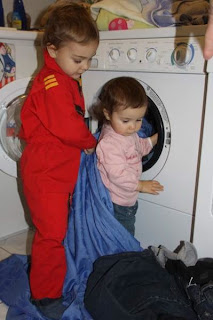 Simon sporting his flight suit helping Chloe load the washing machine and enjoying it. Too bad that won't last forever....
Posted by Lorne at 11/11/2008 05:39:00 PM No comments: 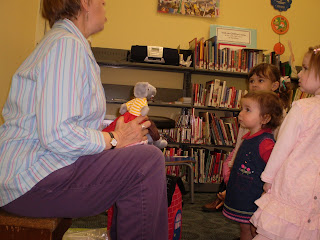 Chloe and the other little girls where quite interested in the Library Story Lady telling about the wolf and the 3 little pigs last Tuesday. It wasn't Moppets, and Chloe wanted to be sure the pigs were safe in the red brick house.
Posted by Mom Bradt at 11/08/2008 12:42:00 PM No comments:

Pictures to go with the poetry..... 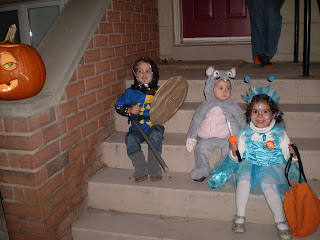 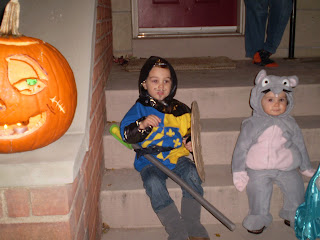 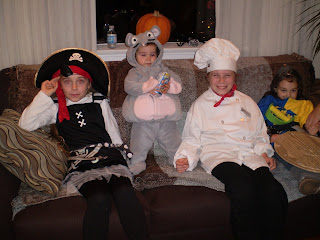 A mouse, a knight and a water sprite
Went out for Halloween treats
They got lots of candy, the weather was dandy
So everyone had lots of sweets.

The mouse and the knight, they then went to see
The pumpkins and treats at the Lees
Met by a pirate with bags full of candy
That were served up by Chef-Boy-Ardee
Posted by Mom Bradt at 11/08/2008 10:33:00 AM No comments: