Film Festivaling in the Rain 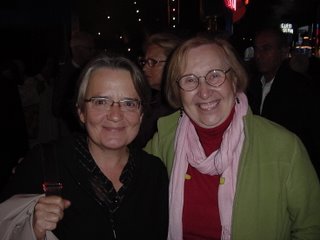 Tuesday: Managed to fit in 3 films, since they were all at the Paramount, and even all in the same theatre, but we had to clear out after each showing.
"The Last King of Scotland" with Forest Whittaker in an amazing role as Idi Amin. Very possibly an Oscar winning performance!
"Macbeth", a very modern version, somewhat reworked, with lots of gangster fighting. The witches were anything but hags, and it was all very "bang up and bloody", but I think I understand the Shakespeare text better now.
"Copying Beethovan", a very fine performance by Ed Harris and wonderful music. When the chorus broke into "Ode to Joy" from the 9th Symphony, a shiver went down my back, and the woman next to me (not Josie) was in tears! Absolutely wonderful. The director, Agnieszka Holland was there for the Q&A, and I even got a picture with her.
Saw Kaye and Derek in line on the way out. Hope they enjoyed their film.

Wednesday: Another 3 film day, even though it was raining and at 2 different venues:
"Strike", a Polish film about the creation of Solidarity and the involvement of a woman welder with the Union and Lech Walesa was very moving.
"Vanaja", an Indian film which is the PhD thesis project by the Indian Filmmaker had all locals playing the roles in a story about a young girl who wants to be a dancer, and move up in the caste system of her village.
"Little Children" started out as a chick flick, and ended up as a suspence thriller, with Kate Winslett. The Director did a Q&A, and I've looked up and odered his previous film from the library.
Josie and I both enjoyed all three films, and hope we can make it to all three tomorrow. It will be tight timing, but should be another good day.
Posted by Mom Bradt at 9/13/2006 07:28:00 PM

You know, this all sounds so great that I have no idea why I don't manage, year after year, to JUST COME. I love movies and these all sound fabulous.

Tell me next year's dates. It really is time I just came to Toronto for vacation, and didn't try to do business meetings, and did come and stay with you and just see movies.