The Calgary Folk Festival has come and gone. Susan and I both volounteered, and spent a bunch of hours on duty, Susan in the Art Market, and me at the Artists' Instrument Lockup. The weather was hot and dry; much better than cold and wet. At one point on Saturday, I heard that the festival ran out of water. Our team coordinator made sure there was lots for us to drink in our tent, and on ice.
The set up was a tent right behind the main stage, in front of a semi-trailer with some stairs (built at the last minute, but they worked). Artists who wanted to would bring their gear to us, we'd tag it with a laminiated numbered tag, and give them a matching tag secured to thier ID badge. As the dated and politically incorrect saying goes, "no tickie, no washie." And the artists were all good with that; the apprecieated the rigid security. Only twice did someone need a guitar but not have thier tab, and we had to play the "describe exactly what's inside, and I'll give it to you if you're right" game. One was Sarah Harmer. The other one I made identify the band of capo he had in his case. He knew.
Here's two of the other volounteers at the tent, outside the trailer. You can see the stairs on the right hand side of the photo. We also had a flamingo. Dunno why. 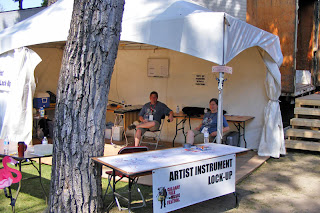 And here's a look into the trailer when it was fairly full. 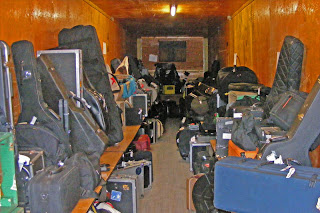 There were, apparently, far fewer standup basses this year than in previuos. There were only two in the trailer at any given time. Other years, they have had MANY. and the do take up a lot of space.
Posted by ooblio at 7/30/2009 12:15:00 PM No comments:

Susan and I got seasons tickets to the Fish Creek Folk Club's lineup this year, and as a special treat, we got an extra season-opener concert with Valdy & Gary Fjellgaard. Susan has kept a stack of vinyl from her collection, and pulled out a 1978 LP "Hot Rocks". She brought it to the concert, and Valdy was all too glad to sign it for her "Thanks Susan 1978 > 2009 HEART Valdy" 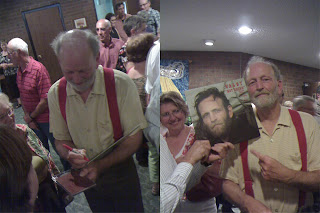 The outlook wasn't brilliant for the Mudville 9 that day

The score stood 4 to 2 with but one inning left to play... 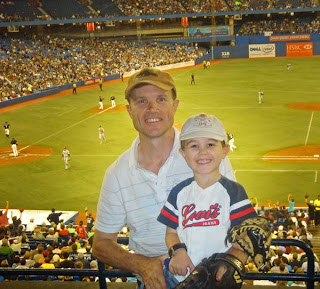 Ok it was the Tampa Rays and the score was actually 5 to 1 for the Jays, but you get the idea.
We joined Dave Lee and his nephews for an afternoon under the Dome. Simon's only disappointment was that he didn't get to catch a fly ball.
Posted by Lorne at 7/26/2009 10:34:00 PM 1 comment: 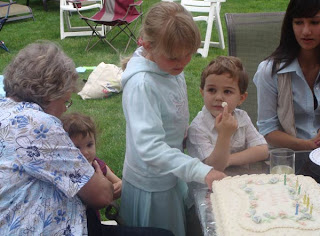 kids getting into Auntie Ann's Cake 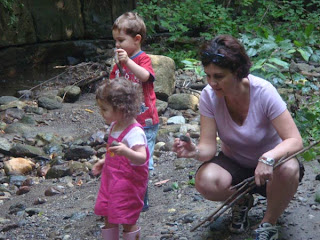 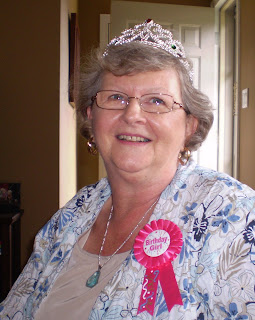 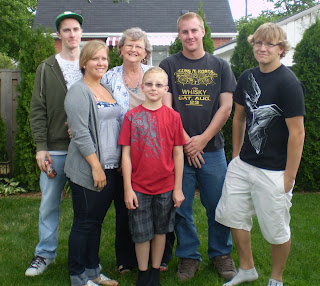 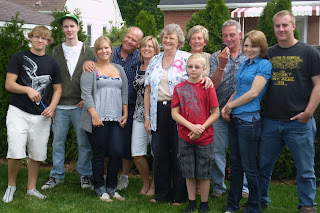 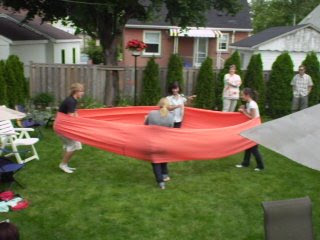 Another wonderful family event, this time celebrating Ann's 70th!
Congratulations from all of us.

OK, so it's only an online real estate news item, but hey, it's better than nothing. Check out this link of the interview I did about the jam session I run monthly at our community centre
Posted by ooblio at 7/20/2009 11:53:00 PM 1 comment: 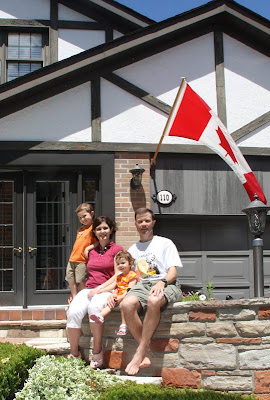 Here is the kind of photo I'd like to get from everyone. out front of our domiciles, house number showing kind of thing. Perhaps a little more people and a little less house. It's hard to frame it be in it at the same time...
This is supposed to be Canada day but was actually 4th of July keeping J-cubed in mind.
post em here and email me the high res ones. I'd like to have them all hanging together on our upstairs hall wall.
Posted by Lorne at 7/12/2009 11:43:00 AM No comments:

Happiest of Days
on Canada Day and Nana's special Day
may the year ahead be filled with joy
love
the woolley ones
Posted by woolley ones at 7/01/2009 06:28:00 PM No comments: