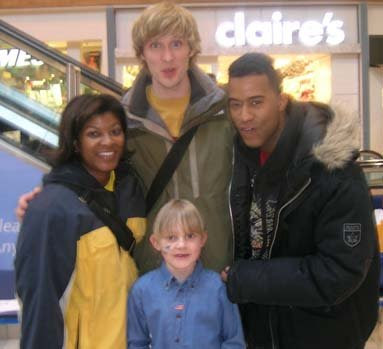 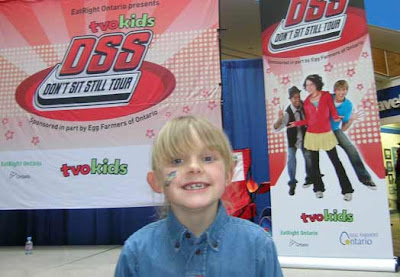 Fiona got to meet the TVO kids team at the DSS (Don't Sit Still) concert on Feb 21st. They danced and learned about healthy snacks with Julie, Mark and Ryan
Posted by woolley ones at 2/28/2009 05:26:00 PM No comments:

what a super turn out on Monday for family day
the mums all brought the dads
with one stay at home dad bringing his wife
to see what moppets was all about
Fiona was a gem to do the actions for me
as "fingers going up" was just not going to happen
arm doing well, and I'll talk to the doc today to book physio and a course of treatment to get the arm into shape.
ttfn
Posted by woolley ones at 2/17/2009 08:14:00 AM 1 comment:

oh the humerous is dis-connected from the scapula

ouch!
what was to be a lovely family valentine's day at the 21st annual Lakehurst winter carnival
started out lovely
we had lox and bagel for breakfast (fiona apparently likes lox now)
and wandered over with our skates at 11 ish
Fiona played the kids games and won 5 prizes before we headed for the ice rink at 11:30
I had all kinds of pr material for moppets - flyers, gum
as there are tons of kids from all over that come.

I had given out about 1/2 of my valentines super packs before hitting the ice
Fiona and I went skating, daddy took video
And boy did I hit the ice
I went to kick a passing puck, caught my pick
spun around and landed backwards on my left arm
I knew I had done something as it wouldn't move far or correctly
there were 2 paramedics on site
with all the layers they couldn't diagnose it but we headed for the hospital
man was that painful ... but not like Lorne's AC split
still
right up there with gall bladder and childbirth.
we were fast tracked and got some meds in to barely take the edge off the pain.
they x-rayed, knocked me out with some wonder drug and I woke up with my arm back where it belonged and in far less pain.
so
I'm in a sling for 6 weeks
moving it best I can
physio I hope. we'll check out our coverage shortly
daily exercises for sure
gotta get that puppy back in shape carefully

Fiona stayed at the carnival with friends and helped to sell tickets and do raffles and go on pony and sleigh rides.
Our neighbours had invited us for dinner so it made life easier.
Glenn's working but helped get me put together.
I can do almost everything except fastening a bra. Something Lorne didn't have to deal with

Moppets is due to be a full house tomorrow with Family Day so Fiona will have to do all the actions and I'll take it easy with the arm and sing my heart out.

A Groom So Very Pleased With Himself

When people gather for a wedding, it's for more than the cake, the open bar, the chance to date the bridesmaids, or do the electric slide, the chicken dance, and the beer-barrel polka all on the same night.

And it's beyond the sharing of a collective sigh of relief, whether because the bride is finally off the streets, the groom is legally bound to the mother of his children, the ceremony won't include the same reading twice, or all the Star Trek communicators will be hidden until it's too late.

It's for something quite a bit more profound: not only to bear witness to a commitment two people make to each other, but also to pledge as a community to support the two of them as they make a life together.

Twenty-one years ago, you stood up to do that for us. And today we're still standing, and so are you right along with us, one way or another.

We often recall the words of the minister who officiated, after the deed was done and JJ had picked me up in a joyful skyward leap and we'd rubbed noses (not something we'd planned, rather than the more traditional kiss, but another one of those well-of-course moments): "I don't think I've ever seen a groom who was quite so pleased with himself!"

When Lorne sent me a sweet sentimental note the mark the occasion, I admit I was moved...and then wondered for a moment what it must have been like to watch the first of the four in our generation cross that threshold.

What were you thinking as you watched?

I know I was trying hard not to cry, and wishing that I had actually prepared precisely what I WANTED to express when it was my turn to speak instead of kind of leaving that to the last minute (setting a fine precedent, 'cause I didn't think of what I really wanted to say at Lorne & Corinne's reception either).

I also knew that, very much like the first time I ever lifted an airplane off the ground, it felt as exquisitely effortless as breathing. I never had any question that either one was the precisely perfect thing that I was always meant to do.

I could not have imagined a more perfect mate -- not only for that moment in time, but, even more extraordinary, someone who, inexplicably, would continue to show up having and doing and bringing and being exactly what and who I needed at every step along remarkable path we have trod together.

How did we celebrate? We went out for a very nice dinner. And JJ surprised me with a 32-gig iPod Touch, custom engraved, "For your ears only. (To be whispered in forever)." Because we really don't usually buy each other presents. It may sound strange, but we are both firmly convinced that each one's presence in the other's life is the most precious gift either of us could possibly have hoped for, wonder how we managed to deserve such treasure, and pray fervently that we manage not to mess with the streak.

wouldn't you have loved to ... 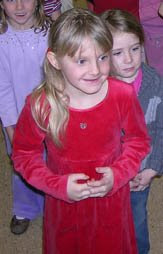 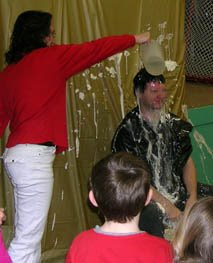 Fiona's teacher placed a challenge to her class to raise money for the Polar Plunge ... another teacher was to jump in the freezing lake and the entire school backs her cause, the children of Honduras.
IF the class could get $50, each of the 19 in the class could throw a cream pie in his face.
day one total: $24
day two: $145
They got over $200 by the end and today was ...
PIE IN THE FACE day as the wrap to spirit week.
I was lucky to attend, and it should be on the CHEX TV.COM website tonight too.
here are the pix. I have video footage of Fiona's throw. the best to that time.
Will put that up next time I get near high speed.
The wet shot is the teacher who plunged giving Mr. Hogan a soaking (his punishment for interrupting her literacy class and getting called on it by the class)
happy valentine's day almost
Posted by woolley ones at 2/13/2009 02:11:00 PM No comments:

so I'm heading up an acoustic jam night at my community centre. I even did a poster.:
If it's successful, I'll have more.

It was a great day of pretty chilly skiing in Ellicottville, courtesy of my friend Pam Heilman, whose law firm supports my company and for whom I occasionally do some client work. In fact, I did a quick Buy American consult for an insulation firm in Mississauga for her on Wednesday...and one of the other partners I saw at the ski lodge then turned around on Friday and called me to help his son in law's company bid on an aluminum products contract with the Defense Department on Friday.

So lemme get this:
Go skiing. Have fun. Eat food with friends. Take pictures. Make money (and not because of the pictures....)