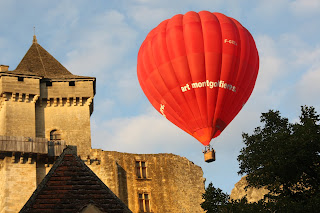 This is it. Our month in France is almost over. Today we will go into Paris (as one must do if you are going to France for a month!). Simon wants to see the Eyefull tower again and also take a train.
I did manage to up load photos so have a look at our previous blog entry as it is fixed.

See you all soon.

a decade and a half ago

Lorne was in Hong Kong
and the rest of the clan ventured to Toronto to witness Karen finding her "keeper guy", and keeping him, and not squishing him like a bug.
what a journey since then.
Dad and Arlene hosted the breakfast at the Prince Hotel
Pam and Mike hosted the party that followed.
The day was blessed with lovely weather as all of our wedding days were.
(J3 had the blizzard the day BEFORE right?)

G's working today, but we're meeting up for a trio dinner somewhere.
maybe swiss chalet, mabe sushi - either will work for me!

Thanks for all your support and patience and most of all forgiveness over the years for all the things that happened that made us grow.
maybe I'll try on my wedding dress today for the first time since then!
ha
Posted by woolley ones at 8/28/2008 08:41:00 AM No comments:

A Few Days in Provence 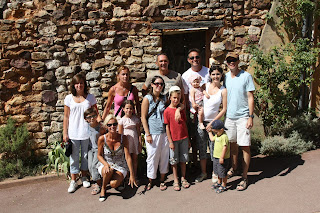 3 families on tour at Roussillon in Provence. 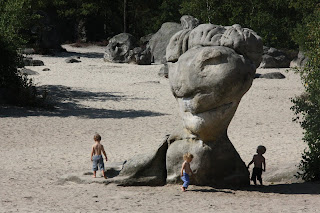 Simon, Maude and Elliot dacning around a bizzare rock formation in a forrest not so far from Mulen. Looks like something out of Lord of the Flies...

We left Vergt on Sunday and are spending a few days near a small town outside Avignon with Corinne's friend Lolo and her family and some other friends. It's a very nice place to stay. We co a little sight seeing in the mornings, have lunch and laze at the pool for the afternoon. It's like a vacation or something.
Lots of pics from the last 3 weeks. Have to do another gallery of the wedding along with those too.
Simon and Chloe are having a good time. Chloe got mosquito bit about 20 times and managed to keep scratching till she is a bit of a mess but we have it under control now. We are more bothered than she is by it.
Hard to believe we'll be home in only 5 more days...
there. fixed the pix.
Posted by Lorne at 8/26/2008 05:09:00 PM No comments: 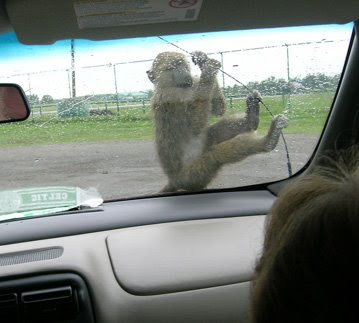 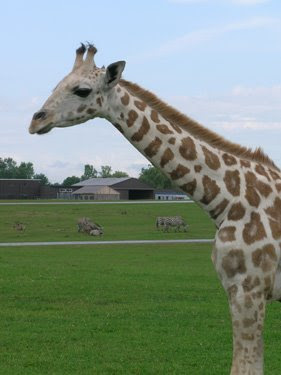 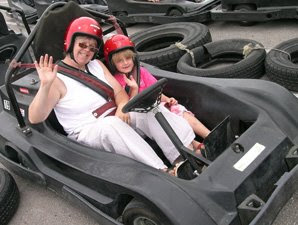 anne of green gables was written 100 years ago and to celebrate we were lucky to find a production of the musical and see it as a family what a treat! Fiona and I had chatted through some of the good story elements and she loved the music you should have seen her face when Gilbert "tripped" over Josie Pye's foot and smooshed the ice cream into Anne's face. What a hoot! here is anne with our 'anne' after the show
and before
with her hat
plus shots from cambridge and yes, that IS a baboon on Pam and Mike's antenna DID WE EVER go to African Lion Safari as kids? I don't recall!

and another first this summer GO CARTING! what a speed racer she is it will have to be a regular thing for the family farm visits. back to the track

can't believe the first day of school is one week away.
we've invited friends over tonight and tomorrow for pre-anniversary celebrations and then on the day of our 15th anniversary, glenn's working and we're going to splurge and go out for dinner.

now to put away stuff from the wedding that is STILL on the dining room table!

We Find That It's Always The Same 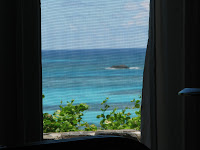 Well, with everyone else posting things, I suppose we can drop a line in here. I had put off posting until I sorted my pictures, but concluded that I could just as easily pick one out of last year's bunch , as I keep thinking I take the same ones every year anyway.

We got back late last Saturday from nine days on PSV, about a day ahead of our luggage, which was moving more sluggishly than we were during our last plane change in Atlanta. Not that we cared.

Actually, I became more adept at managing the sea kayak solo, and circuited the island at least half the days I was there, and seemed to have remembered a bit about the boardsailing I did the previous summer, too -- which is to say, I got much further out into the open ocean, downwind and pushed by a strong current, before running out of any skill to tack back, and having to get a tow (which is what the boat guys are there for). And decided to learn to sail both the sunfish and the HobieCat, which I did successfully circling two different islands and tacking back and forth between them.

JJ and I both read the first of Barack Obama's two autobiographies, and another book by Tony Horowitz, "A Journey Long and Strange" (about America's discoverers between the Vikings and the Pilgrims), and I mowed through another three novels and a book about how the Grand Canyon was created (actually more complicated than "a river runs through it, dummy").

And we ate and slept and napped and bobbed (well, mostly me) and beachwalked and climbed the island's hill, and watched the ocean a lot.

Work is trundling along for us both; if there's news, we'll let you know.

some pix from calgary

Finally getting my head above water. Here's a pic of Susan and Natalie relaxing on our deck 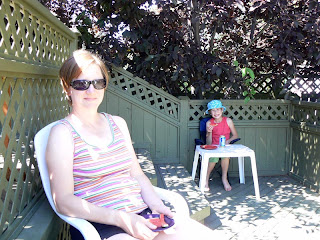 And here's thw same two women "outstanding in thier field". OK, it's not really thier field, but it's a field. Corn.

And today, Jasper graduated from his first obedience class. 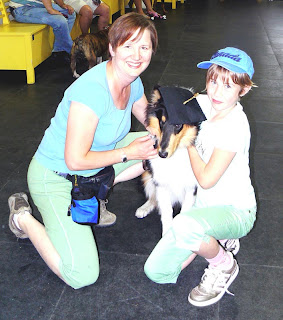 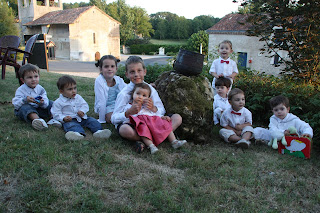 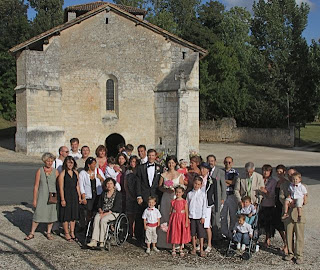 And thus ends a month long wedding feast. Since we took our sweet time getting engaged and married, why not start the wedding and finish it in another country a month later...
It was another lovely day, in the French country side in the small town of Jaure. A little ceremony in the small eglise then drinks and eventually dinner then a little dancing across the way at the Auberge.
Posted by Lorne at 8/09/2008 05:48:00 AM No comments:

Apparently we are on "Spanish Time".
We arrived on Aug 4 and ate dinner at 8:15.
Yesterday we arrived in the south in Vergt and ate at 10pm.
Today Francis and I played a round of golf this morning at got back around 2 just in time for lunch at 2:30. Simon and Chloe spent hours in the pool this evening and had a great time. Dinner was served at 10:15pm. This is 'Spanish time' for dinner.
I figure that by the time we have to go they will just change the name 'dinner' to breakfast.
Posted by Lorne at 8/06/2008 05:45:00 PM No comments:

Yesterday was my birthday. This week was Simon's last Tuesday Nap at Gramma's. I love the little angel's pink halo! It's actually his favourite beady pillow. We've had lots of fine times together on Tuesdays. In September Simon will go off to school...can't believe it, and little sister Chloe will come and spend Tuesdays with Gramma! Besides playing the piano, we'll have to have outings to .....the library, the museum....and of course to check out Prada, Chanel, and cruise through Holt's! It will be a new experience for both of us! I look forward to visits with Fiona too, and certainly to Skyping with Benjamin and Natalie as well, and visiting in Calgary and Arlington. All the grands are growing up, and I don't want to miss any of that.
Visiting with their parents is great too, and I delight in having all my grown up kids around whenever they can visit or be visited.
Thanks to all of you for making the wedding festivities on 06, 07, 08 such a wonderful and unforgettable day for Lorne and Corinne and especially for me. I'm a very lucky Mom to have such a beautiful, talented and loving family. Thanks again for everything.
Love and hugs....always.....Mom
Posted by Mom Bradt at 8/01/2008 11:39:00 AM No comments: