Everyone had a go with the Wii.
Loads of fun for the whole family... 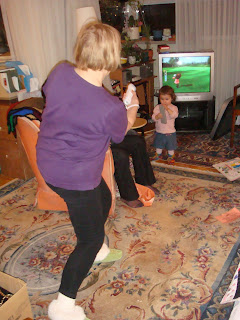 Chloe! Look out for Gramma's drive!

Twas the week before Christsmas

I finally got our tree photos up.  check down a few posts and you'll see them in with the others.
Here's some of what we were up to the last couple of weeks. 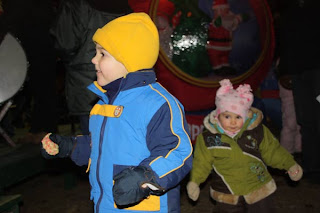 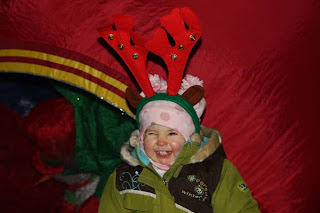 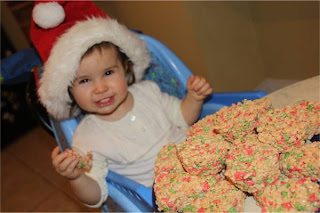 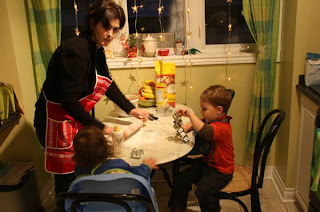 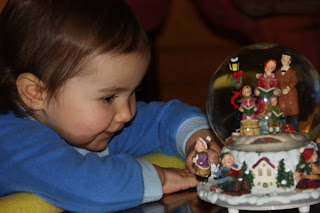 It's just before 8 am
the gifts have been opened with great glee
there is a lovely smell of someone else cooking bacon
the turkey lurkey is still frozen
AH
Christmas Morning!
Love to all
from all the woolley ones
Posted by woolley ones at 12/25/2008 07:52:00 AM No comments:

None the less, here it is, a link to our favourite ghost of Christmas past...

It's about 10 min.  Feel free to skip on ahead.
Do you remember the big styrofoam letter phrases across the back of the alter?
MERRY CHRISTMAS EVERYBODY!!

Here is our Tree as it thawed and was decorated. 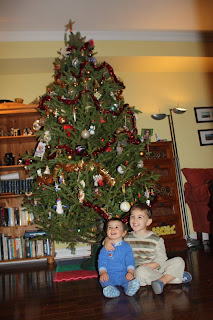 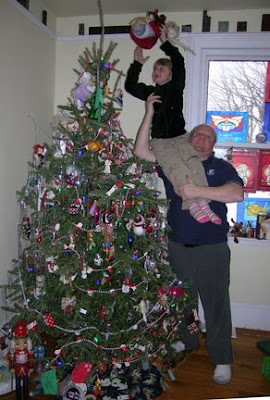 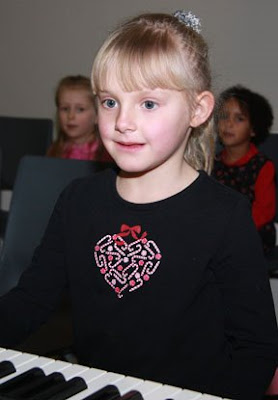 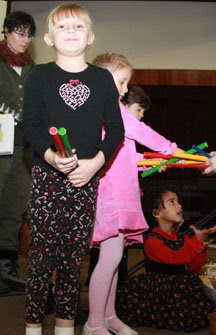 Here Fiona does a rhythm number followed by her solo in her first Piano Recital on Dec. 7th. She played Jingle Bells and Ode To Joy (known to her as ode to spider fingers as it was introduced at Halloween in the book)
Posted by woolley ones at 12/24/2008 08:46:00 AM No comments: 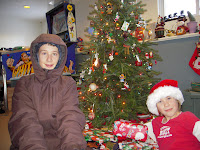 Natalie's the Judge!
Benajmin declared a cooking contest, and put Natalie on the hot seat!

After Sue and Judy each enjoyed a brief turn in first place, watch while Natalie declares the scores for Benjamin's breakfast!


But then JJ and David Do Dinner, the pizza de resistance, aka the Italian Job... 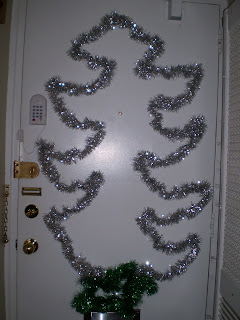 Hi: Well, this is my tree for this year, and only drops a few silver needles! It's well protected with all the locks too, eh?

The photo below is from my window looking south, about 3 p.m. on Friday, and the show is still coming down! The swirls of snow are going up, down, left and right, and I'm glad to be in and warm, and not having to go out and about. It was far snowier this morning, and we'll see what the next "storm" brings. 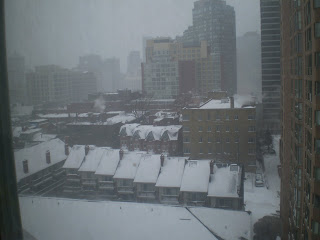 Show us your trees!

J3 year in Review -- a LONG post, with no apologies

Not as funny as Dave Barry's Year In Review, but maybe not as long...

After many years of producing a card with the highlights in 6-point font, we decided to try something different, and offer (for those who care to read it) the highlights including links to more photos and words than we can get into a card. Hope you enjoy it...

The Summary: on the family front, some happy gatherings and high highs (a wedding on the Bradt side; Bat Mitzvah on the Gertler side; our 20th wedding anniversary) and one very sad low (William Lorne Bradt passed away suddenly in March). Lots of speaking gigs and travel for each of us, and the best year for Summit Insight yet. 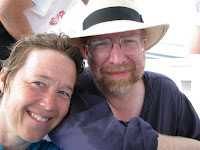 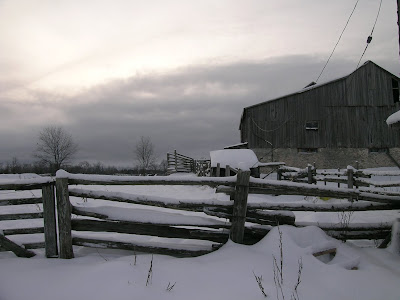 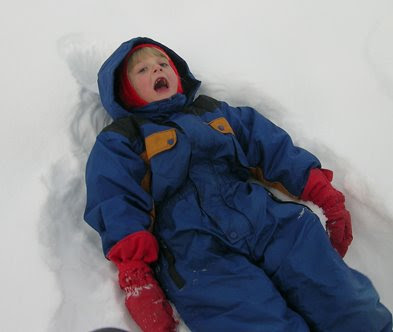 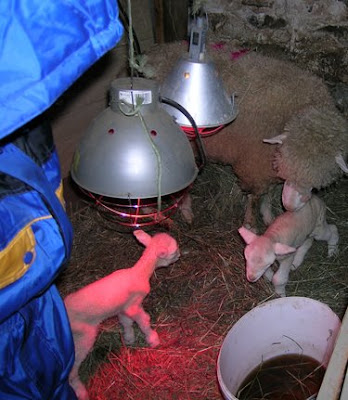 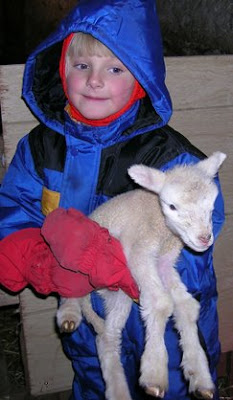 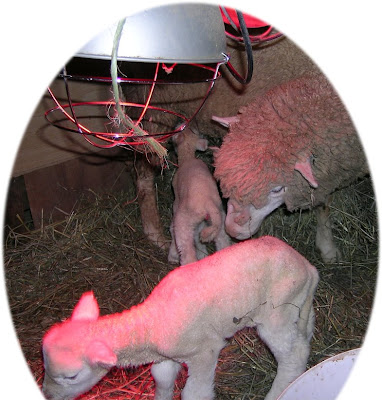 third set of twins born this week on the coldest days of the year.
Glenn actually pulled trilpets out on thursday - but only 2 made it.
but its been a good year.
more on the way this weekend
Posted by woolley ones at 12/12/2008 10:23:00 AM No comments:

Have to ask Mom to confirm which kind of tree they had as kids.
I remember helping Dad put up the blue eaves lights with those little green clips.
I think it was some kind of homage to a decoration his dad made when he took a piece of plywood, covered it in tinfoil and put holes in it at the places where lines met of a 5 point star.  The thing was, just those points lit up don't really look like a star.  Well it was shinny and colourful just the same. Another labour of love that we never really appreciated enough at the time.
He seemed to like making things like that to decorate and celebrate Christmas.  Something he kept up long after into making wooden Reindeer etc..
It may have been weather or everyone's schedules, but I remember being disappointed on what I recall was the first time we didn't go out to cut down a tree.  I do remember it to be a big deal to actually be able to 'chop' down a real tree and we shouted "Timber!" as it fell.  Then taking turns hauling it back to the car. There was a pride in ownership there that isn't the same as picking one out off a lot.
There was of course the Christmas Branch Dad brought home one year.  I remember it being pretty late in the season and selection on the lots would have been low anyway.  We gave him such a hard time about it. In the end, once full of all our ornaments (There would have been about 120 tagged ornaments by '84), lights, tinsel angel hair, beads, candy canes and popcorn strings, that tree was as lovely as any other and as always, symbolized Christmas for us.  How very Charlie Brown.
I remember the house lights being on (I was probably the one plugging them in under the carport each night) as I went out to do my paper route each night.  Twilight when I went out, but the lights were there to welcome me when I came back in the dark.  You could see the multi-coloured tree lights though the front window behind the sheers.  It was Christmas.
Posted by Lorne at 12/07/2008 05:11:00 AM 1 comment:

Funny, I wanted a pine tree this year as I thought it reminded me most of dad.
Ikea had only balsam fir's at the super cost of $20, so Fiona picked her fave and off we went. (Home Depot prices soared to over $40 each to start!)
Lorne and I were chatting and he said Dad was short needle and Mom was long needle.
What do YOU recall about christmas specialities and Dad?
stress aside ...
* guitar strap gift on Christmas Eve for Midnight Mass
* all being there to have the tree topped (on rotational basis of course)
* tree cutting expedition
* blue spot lights and house lites along the eaves

Ok since nobody else is posting, I will.
Here's some stuff from the Christmas Spectacle at Petit Chaperone Rouge.
He sang Roudolf (in french) very nicely and got into the motions too.  After, they fed the lot of them sugar galore and then a visit from Pere Noel to see how wound up the kids could get.
Here's the video clip (apologies to dial up folks). 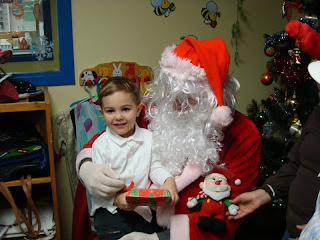 Simon got a present from Pere Noel. 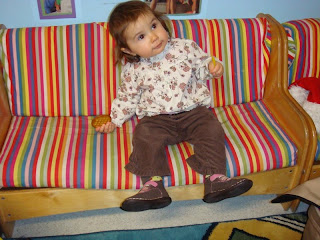