So the Drive from Calgary to Sorrento got me in here at about 6:00 PT. so that was about 9 hours, but I had a couple of breaks along the way, Sadly, no garage sales along the Trans Canada. 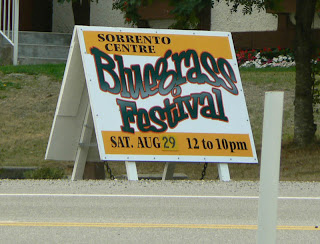 The Sign was a welcome greeting on pulling into the city.

The Fires, on the other hand, no 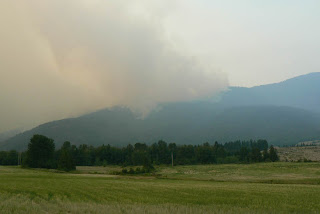 t so welcome. Last night, the fire was burning on the south side of the ridge, away from us. Occasionally, you could see a tree "Candle", basically ignighting and going up in flames, very bright, and very fast.
This morning, the burn was well over the ridge, on OUR side of the hill. Here's a picture, to give you some idea. 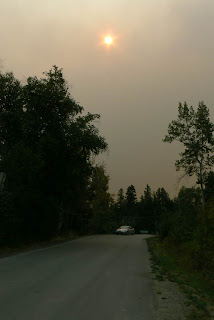 The good news is that the wind was blowing mostly away from us, sort of pushing the smoke, and presumably, the fire back to the south. But the sky is more smoke than either cloud or blue. Apparently, without the smoke, it would be a very clear, hot day.
But, on to the BC Bluegrass Workshop. Within an hour of getting here, I had met many of the poeple I had made friends with last year. As it turns out, many of hte people who came to "week 2" last year opted for "week 1", which is just ending. The fact that School starts for so many kids this coming week has had an effect on people's decisions. I heard there were about 250 attendees last week, but I've not heard the numbers for week 2.
I met up with the teenagers who I played a lot of frisbee with last year, and picked up right where we left off. Last year, the gimmick for the game was to pick superhero names to be called by, so I opted for Mighty Mouse. The number of "Hey, Its Mighty Mouse" greetings was both surprising, and fun.
I met Todd Livingston, who is teaching the beginner/intermediate dobro this coming week, and he's amazing. I've opted for the intermediate/advanced course, and I'm not certain which I'm best suited for. fortunately, which ever one I get into, it'll be great. The size of the classes may have some bearing on a decision to switch. I'll know more tomorrow evening.
I jammed on the bass last night for about 2 hours, and had a great time. The jam sessions at the community centre are paying off, as I got to choose and lead the song on my turn, and we didnt' have the luxury of music to read from (typical with late night, outdoor jam session; so you'd better have all the chords and lyrics memorized!) The humidity is something to contend with, so EVERYBODY was re-tuning every few songs.
Today is the Bluegrass concert,. with one band every hour, starting at noon. The one on stage now wasn't a prime act, so I'm taking the opportunity to set up this blog posting. The remaining 2 bands are not to be missed.
There was a fellow wearing a bluegrass t-shirt, with a warning label at the bottom:

Lots of people with good sense of humour.
I've got an appointment with the camp luthier tomorrow morning to have a look at my bass. There was a strange lonely POP that came out of it while it was just sitting behind me on the stage last night. Might be the humidity moving the sound post. Might be a seam popping. I'm not sure. So Dave Sohn will have a look. He's an excellent luthier; he's been here for many years doing this, in addition to his instrumetn making business.
Days are hot, nights are cool, but not too cold. I think there's only 3 in my cabana for the week, so that should be tolerable. One of them is a banjo player named Christie, who's a pilot for westjet; he knows Karl Lingwood. I met Christie last year, so it's always great to be near people you know.
A quebequois fellow in the next cabana was selling spoons for $15, and for an extra $5, he threw in a cd. That was an easy decision.
Having a blast, and I haven't even taken my Dobro out of its case, yet!
More Tomorrow.
dave.
Posted by Unknown at 8/29/2009 10:12:00 PM No comments:

The cousins come to Calgary 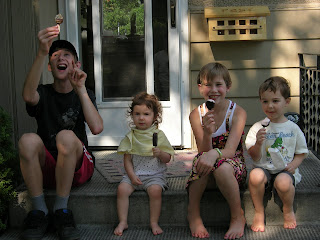 We forgot how messy four and two-year-olds are when they eat ice cream! 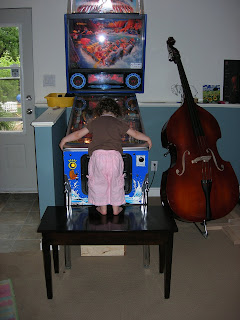 I'm off to Sorrento, BC tomorrow morning for a week of bluegrass. This year, I'm taking the Dobro lessons, but bringing the Bass for Jamming. The last two times I went to Sorrento, the last week of august was a mixed bag of warm, cool, sun, rain. Check out this forecast: 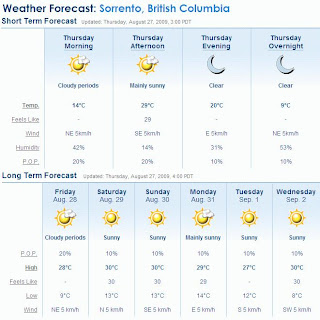 I'll make a point of posting pix every day. 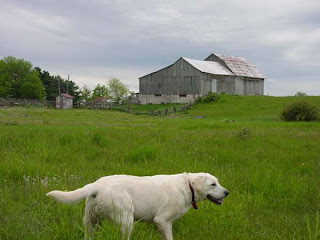 so we spent lunchtime last monday playing on the Pedestrian thoroughfare in Calgary. We grossed about $30 in two hours. Shame parking cost us $10. 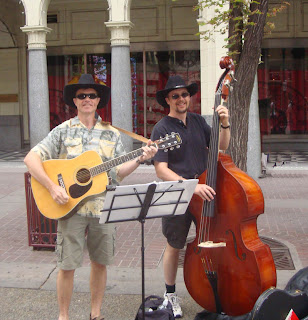 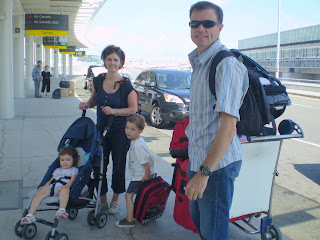 They got away safely, and almost on time, in spite of the traffic congestion on the 401. Happy Holidays in Calgary to the hosts and the visitors! Love..Mom 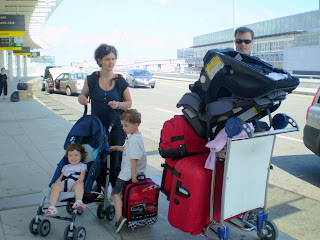